Showing posts from December, 2017
Show all 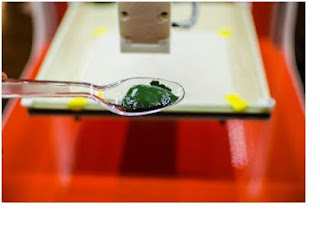 Spirulina is an organic superfood that eliminates diseases, reduces cholesterol, and energizes you. If losing weight or eating healthy is important to you, then spirulina is something you might want to look into.

Spirulina was originally found and utilized by Aztecs in the 16th century and later rediscovered in Lake Texcoco by French researchers. It is high in protein, and carries many important antioxidants and vitamins, such as Vitamin B-12 and iron. Unlike many other superfoods, fresh spirulina is odorless and nearly tasteless, making it a great addition to almost any food. In a recent SE3D  experiment, spirulina was mixed with chocolate to create a superfood chocolate print that was indistinguishable from a normal print. Furthermore, it is extremely affordable to buy. Grown on a farm or taken from a lake, this algae is not in short supply. It has no harmful side-effects and is a natural appetite suppressant.